Well...It's hard to believe that we are we've already had the first 3 performances of Titanic...Only one weekend to go. This whole process started in September for Zach, with auditions and rehearsals kicking in about the beginning of October. Kari and I saw Titanic on Broadway about 10 years ago and we loved it then. We have been listening to the music ever since. We were excited when the school announced that this was their musical of choice this year. We were shocked when Zach started getting callbacks during the auditions (Sorry, Zach...Yes, we were shocked!). Then they had him auditioning for the part of Frederick Fleet (who sings one of our favorite numbers in the musical). He landed the part and hit the ground running.
In addition to Water Polo, seminary, and school, he was attending regular rehearsals. Then...pneumonia struck. He was on bedrest for 16 days (fortunately most of it was during Christmas break). We thought that his role was finished and that he would be replaced...but he healed just in time for the final weeks of 5-hour nights. For the last few weeks, he has been at the theatre from after school to 10pm. Whew! Now we're half-way done. I snuck in our Flip video to record some of Zach's parts. I also ripped off some pictures from Jer & Jenn's website...Because they took some stills last night. Check out their blog for some better quality video of last night.
First...The Pics... 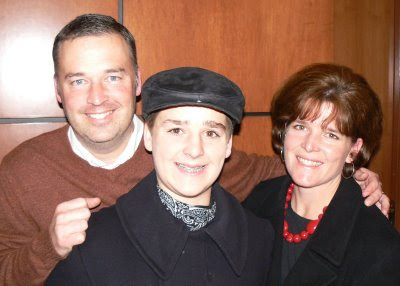 Mom, Dad, and Zach after the Saturday Night performance.

The entire cast during the opening scene. Zach is on the upper left side of the set (he's the one between the guy in the tuxedo and the guy in the fancy uniform...Look for the cool black cap!) 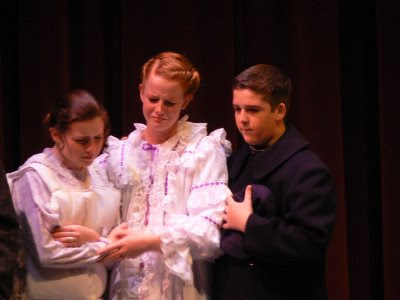 Zach had a big kiss during the beginning scene (we'll get that on here soon!)...but here he is as a survivor at the end. No kissing during this sad number.

The final number (The survivors). Zach is to the left of the middle next to the two girls in white.


Now the videos (pause my music on the side of the blog to best listen to the video)...

This is the opening number. It's a short clip of part of Zach's trio.

The end of the opening scene. Zach is on the left side with the trio of guys.

Sorry for the video quality. Here is Zach with his solo. End of Act 1.

Part 2 of his solo. Things are building up!

Here is the final part of Act 1. Zach's big line as he spots the iceberg!

Zach did an awesome job. I was impressed with the whole production. Good to see you guys too.